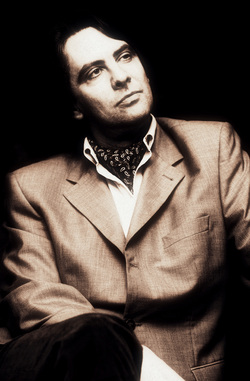 George Hlawiczka is Artistic Director of I Maestri, an orchestra he foundedin 2001 in London, and organizes an extensive concert series in London.

He has taken I Maestri on tour to Montenegro, Greece, where he performed Respighi's Concerto Gregoriano at the Patmos Religious Music Festival, to Sicily and Portugal. Most recently he played Beethoven's Triple Concerto in Lisbon. This summer he will conduct I Maestri in Verdi's Falstaff at Berbiguieres Chateaux in France. Further tours include Greece this August and SIcily next May.

He has also conducted the Vaasa Symphony, Verona Philharmonic, Pilsen Radio Philharmonic, Brasov Philharmonic and Moscow Symphony Orchestras and participated in the 2001 Sibelius Symposium Pilsen in the Czech Republic.

As a violinist George Hlawiczka was a member of the English Chamber Orchestra from 1999-2008 and now pariciates in project with the Les Arts opera with Lorin Maazel and Zubin Mehta. He is an active chamber musician, performing with pianists Karin Lechner, Luis de Moura Castro, Ratimir Martinovic, cellists Jian Wang, Luis Zorita, Alexandre Debrus, violinists Sarah Chang, Dmitri Sitkovetsky, violists Nobuko Imai, Maxim Rysanov and clarinetists Joan Enric Lluna. He has performed at the Norfolk Chamber Music and the Aspen Music Festival, Colorado, with the Lincoln Centre Jupiter Players in New York and recorded for Radio Scotland, Germany and Luxemburg. He toured Germany with the Budapest Chamber Orchestra, performing Vivaldi's 'Four Seasons'. He just returned from Mumbai where he played chamber music with Dmitri Sitkovetsky and friends and has been invited to lead the Symphony of India for the next two years in their September and February season and tours

Future concerts include recitals in Hartford, USA with Luis de Moura Castro and in Maastricht with Peter Coelen. He also participates in chamber concerts as in May when he will perform Dvorak quartet and Bartok Contrats in Lisbon with the Darcos Ensemble.

He has performed several concertos, including Berg, Beethoven, Brahms, Prokofiev, Bartok, SIbelius and Respighi. He will record the Respighi and Skalkottas Violin Concerto, both of which are neglected masterpieces. In June he will also perform Walton's Violin Concerto in a concert to celebrate the Queen's Diamond Jubilee.

George Hlawiczka studied conducting with Lawrence Leonard, Jorma Panula and David Zinman and Murray Sidlin and was a Fellow at the Academy of Conducting in Aspen between 2000-2003. He has taken masterclasses with Sir Neville Marriner, Ivan Fischer, James Conlon and Michael Stern.

He graduated from the Utrecht Conservatoire, studying the violin with Wiktor Liberman and Philippe Hirshhorn before completing the Advanced Soloists' course with Yfrah Neaman at the Guildhall School of Music and Drama.